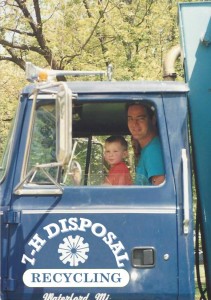 Our company was founded in 1991 with the idea of helping to solve a universal problem. “How to get rid of stuff that’s no longer needed, responsibly, without “breaking the bank”.

From 1978 until 1995 my family owned a successful weekly curbside garbage company called 7H Disposal in Waterford, Mi. What set us apart from our competitors was our attention to service. We actually put the lids back on the trash cans after emtying them. We also raked up the mess created when animals (mostly dogs) got into the trash (a common problem during that era).

Often I was the one who did our “special pick ups”. Those were the items and jobs not included with normal rubbish removal. I found this part of the business rewarding. I was able to interact with customers more. And I never knew what I’d  find next. As they say “one mans junk is another mans treasure”.

In 1991 I started Able Hauling to concentrate on the special pick-ups. Later changing the name to Able Junk Removal to accurately describe  our service. We have adapted and succeeded over those years while hundreds of competitors have come and gone. I credit our success to all of my helpers over the years. Also, it only takes a little more effort to do an excellent job rather than a mediocre one.

Get a free estimate now!